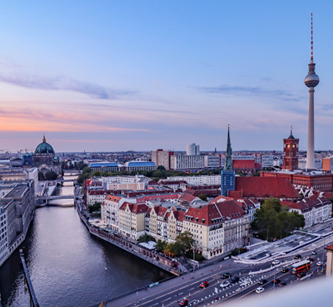 Famous for its city landscape, moderate year-round climate and museums, Berlin has also risen in the ranks as a European tech hub in recent years with its ability to attract top talent, businesses and investors. Berlin ranks evenly and in some studies even overtakes London as the top tech spot in Europe. Berlin is Europe’s largest economy and most populous city. In 2019 it was estimated that a startup was formed every 20 minutes there. For HR executive search firms Berlin has many established and startup companies with a need for People/HR executives to help attract top talent and build a productive, people-focused company culture. The German capital has drawn tech startups from around the world, solidifying its position as a leading European hub and also attracting venture capital (VC) with Berlin now a key place for startup investment.

Tech companies are attracted to Berlin’s low cost of living, relaxed and friendly culture, English-speaking accessibility and affordable office spaces. Young leaders are particularly drawn to the city’s unique culture as it has become a hotspot for street art, pop-up cafes, music festivals and cool fashion. Berlin’s nightlife has been celebrated as one of the most diverse and vibrant of its kind, and it is also home to museums, theatres and a wide variety of local and international cuisine.